A traditional style kitchen to fit seamlessly with the rest of the home but with a modern twist. Handmade solid wood kitchen units painted a soft grey give the kitchen a fresh and modern look reflecting the light in the space. 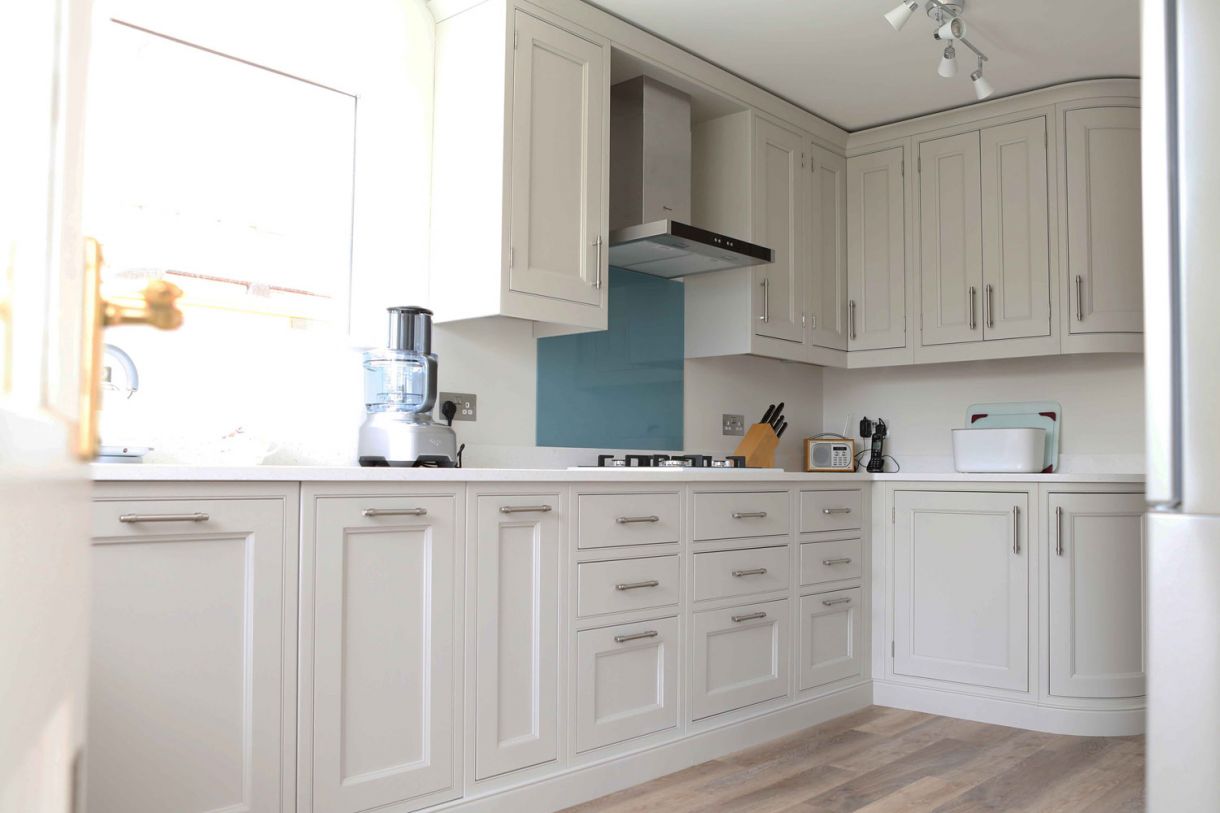 In a quiet, picturesque street in Backwell, Bristol there sits a row of 1960s homes with big windows opening out onto the long, lush green lawns. These lightly coloured homes are set into the backdrop of surrounding fields and woodlands with views across Bristol. We were lucky enough to be visiting one of these homes belonging to David and Tina Andrews who just had their new Prentice kitchen designed by Gardiner Haskins and fitted by one of our talented installers.

David and Tina wanted a traditional style kitchen which would fit seamlessly with the design of the rest of the home but with a modern twist. They were also set on having a solid wood kitchen which would allow for a custom design to fit the unusual space they were working with. They opted for a Prentice Furniture kitchen as these have hand finished, solid wood doors in bespoke sizes and unlimited paint colours. They chose to have the units painted to match Farrow & Ball Cornforth White to give the kitchen a fresh and modern look and reflected the light in the space. The solid oak doors still allow for the natural quirk and grain of the wood to be visible when painted. These units were paired with a white quartz terrazzo worktop which is speckled with different colour flecks of quartz stone and adds a modern edge to the shaker style units.

The couple considered extending the house but decided to keep the kitchen as it is. The room is bright and open facing over the back garden with the windows creating a panoramic-style view of their lovely garden. As you enter the room there are units on the left built into the wall, which is home to two built-in Neff ovens, a pantry cupboard and a large American fridge freezer. On the right there’s ample worktop space hugging the wall all the way to the bottom of the room where the sink overlooks the garden. This kitchen is perfect for cooking and baking, something David and Tina both enjoy.

It was the little design choices with choosing colours which Tina and David found caught them out and took a little bit longer. For the splashback behind the kitchen hob David wanted something subtle with a bit of colour, but nothing too bright to distract as people walk in. They had to make several trips to get the perfect shade of paint for the walls and ended up choosing a bright white with just a touch of grey to compliment the units. They chose Karndean flooring and after several visits to the Karndean showroom they found the right flooring which had subtle hues of grey perfectly matching their kitchen units.

TIP: David and Tina took a sample unit provided by Gardiner Haskins to the Karndean showroom which allowed them to match the colours up.

The Design and Installation Process

David and Tina first stepped into the Gardiner Haskins Interiors’ showroom in September 2018, working with our Kitchen Designer, Alec, to get the measurements and plans drawn up. Alec says, "When I first visited David and Tina it was clear that they felt their existing kitchen layout had worked well for them. The emphasis of the project was to update the look and improve accessibility of the storage by using deep drawers and pull out corner units to make the kitchen easier to use."

They originally planned to fit in early 2019 but due to some commitments with catering for a local event they delayed until 1st April. The kitchen fit was a complete service which took 3 weeks in total.  The work included removing the old kitchen, plastering, electrics, gas work, plumbing and flooring.

Alec gave them ideas to make the most of the space, such as buying a combination oven also acting as a microwave to save buying an additional microwave which takes up more space in the kitchen. By their back door the original kitchen had a large angled unit which made it difficult to open the back door to the utility room. Alec suggested having a narrow cupboard before the curve to make room for the door opening. This allows the back door to open wide and improves the access.

The kitchen fitter was Paul who we’ve worked with for many years. Tina described Paul as an excellent kitchen fitter and a good project manager too, coordinating with the different trades people for each part of the project which requires specialists. 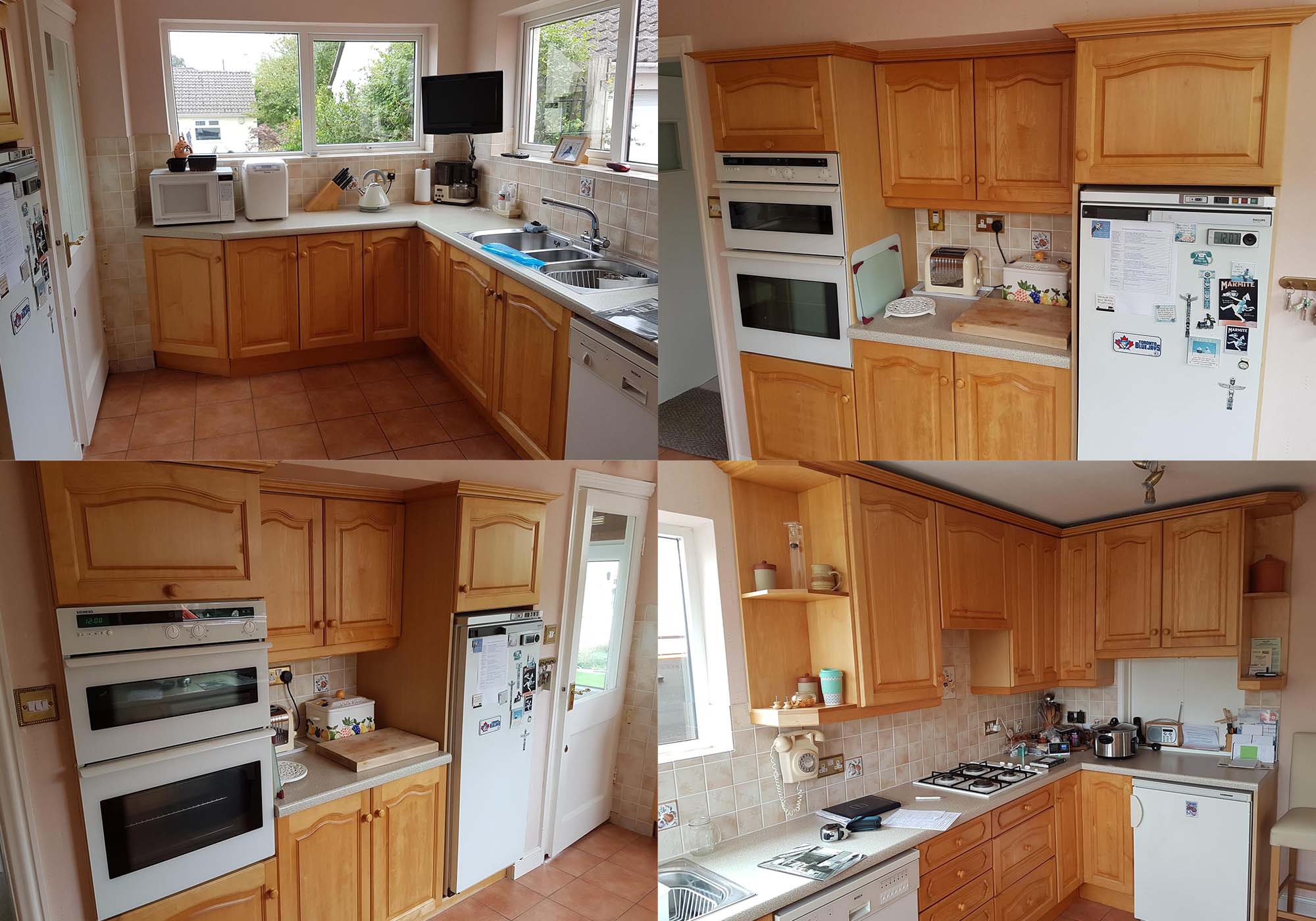 You can also email us at kitchens.bristol@gardinerhaskins.co.uk 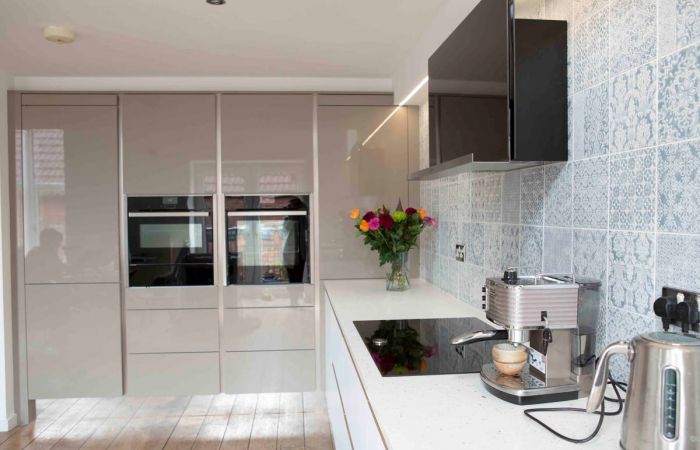 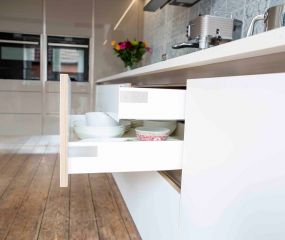 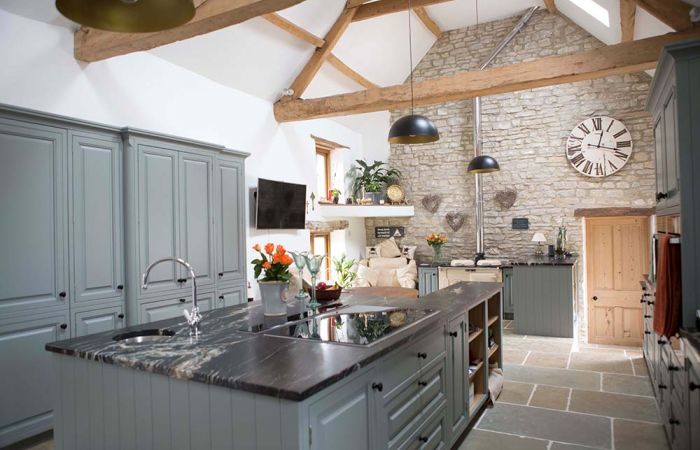 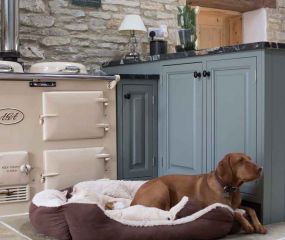 Words can’t really express how astounding this fitted kitchen is. Impressive and awesome do not justify it! As soon as you see the grand, beautifully grained oak, front door to the kitchen you have a feeling it’s going to be special!