Even before stepping foot through the front door, it was exciting to see the new kitchen in Wayne & Jane’s renovated modern barn conversion compared to the kitchen design plans. 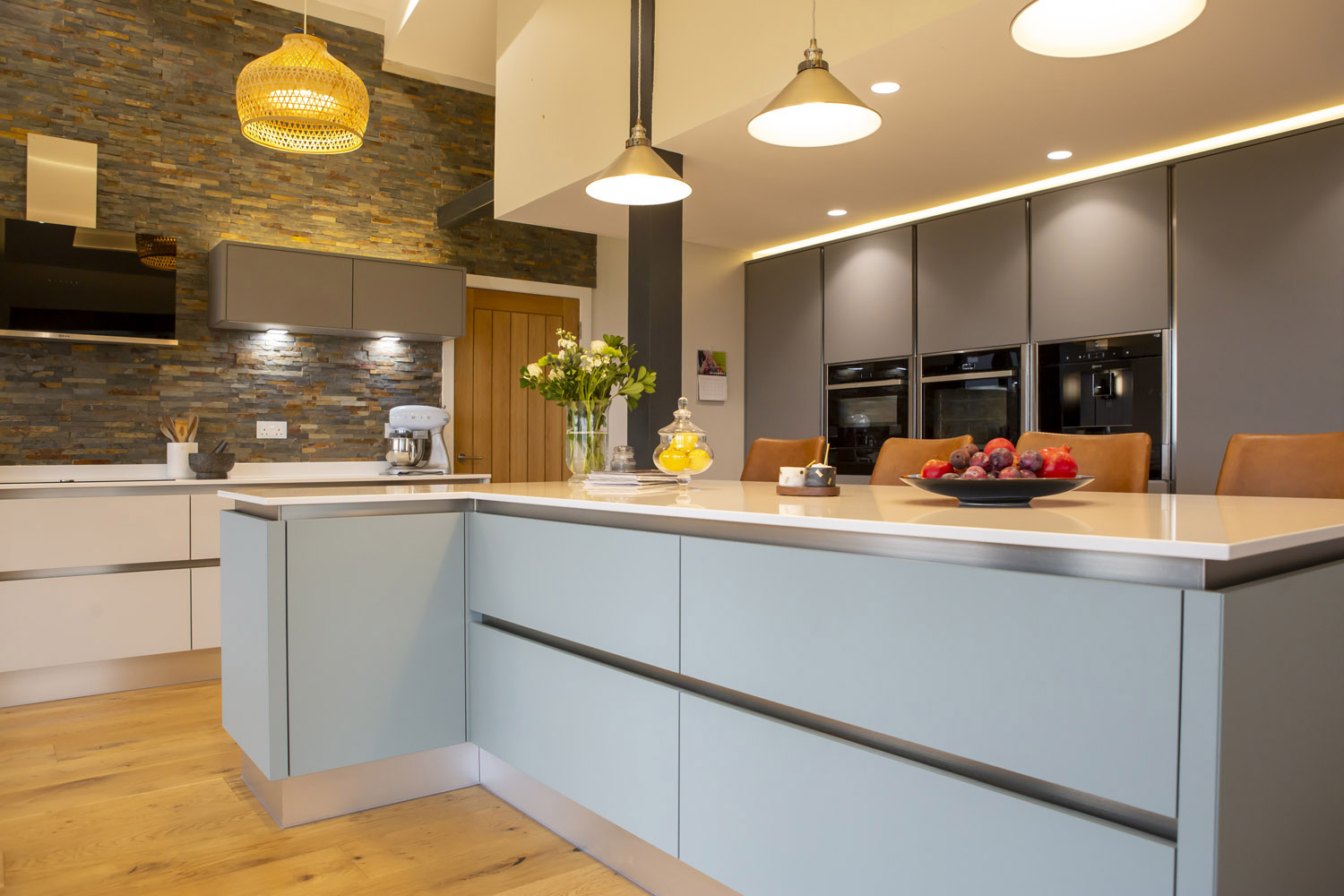 The new modern Crown handle-less kitchen sits beautifully at the rear of the property with amazing views of the countryside beyond. Originally, Wayne and Jane lived in the farmhouse next door to the barn conversion and Jane loved the farmhouse shaker kitchen style with the Aga. So, when they decided to purchase the barn and renovate it, she always thought she would go for the traditional farmhouse style kitchen again. A visit to a friend’s house with a modern kitchen style also from Gardiner Haskins made her think a little differently. They had fallen in love with the modern style. One trip later to the showroom to see Alec the kitchen designer, convinced them both that a modern style kitchen would work well. When Alec came to the house to measure up, there was nothing but a complete blank canvas and shell for the kitchen. He could see the front of the house taking shape and recommended a modern kitchen in keeping with the modern design of the renovation. 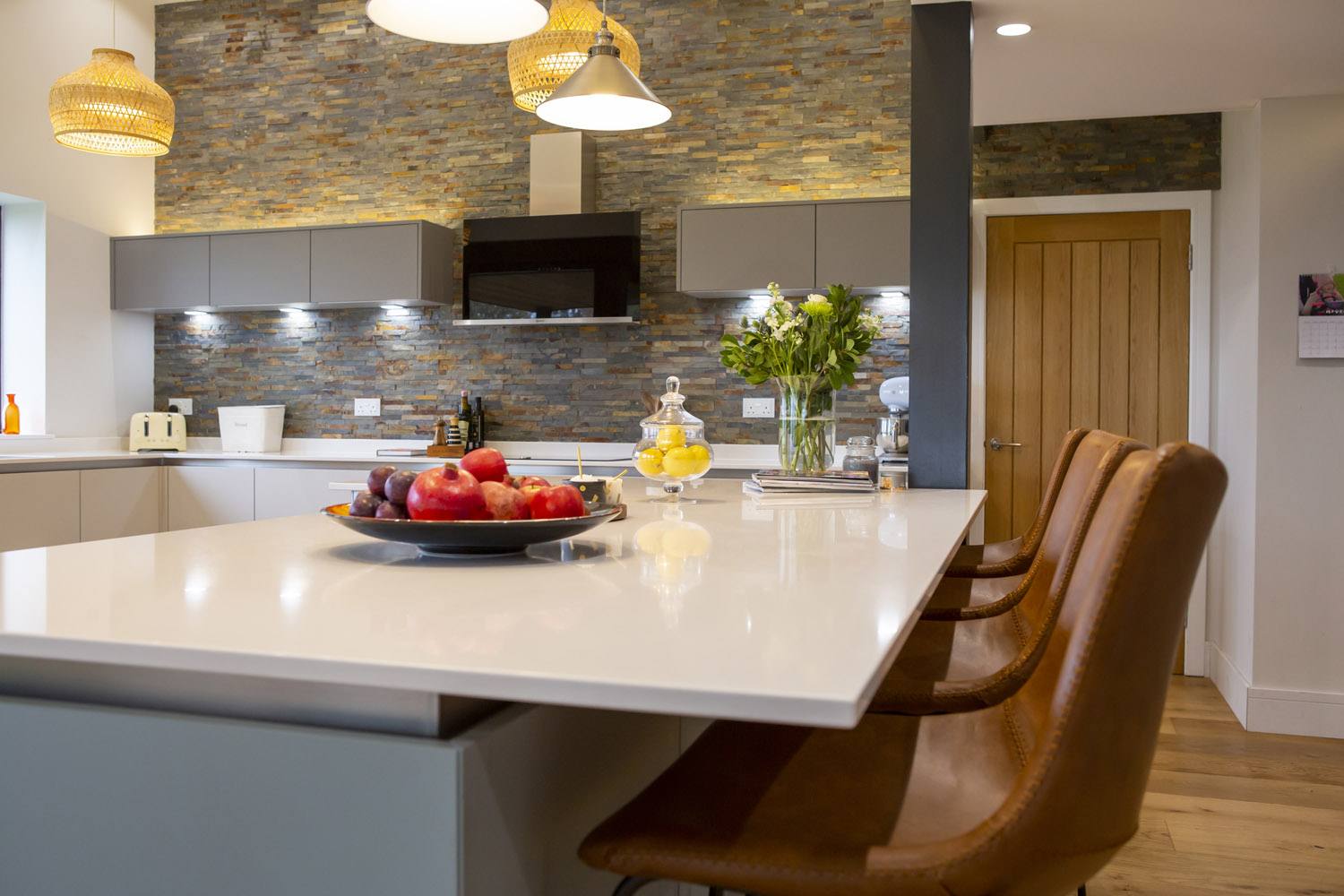 Three tone kitchen cabinetry matches together beautifully, whilst still creating a subtle contrast. The L shape kitchen island features plenty of storage with the comfiest bar stools positioned to make the most of the beautiful view out to the countryside. With a double height ceiling you would be forgiven for thinking the kitchen cabinetry would be lost in the large expanse of space. Quite the opposite, the feature wall painstakingly hand-tiled by Wayne creates the strong impact and the high kitchen cabinets blend seamlessly into the feature wall. These all combine to soften the white expansive space that was there before the kitchen was built.  Gorgeous rattan lighting, alongside pendants above the island and downlights in the ceiling create beautiful tones of light in the kitchen effortlessly controlled through the mobile phone which Wayne installed himself. 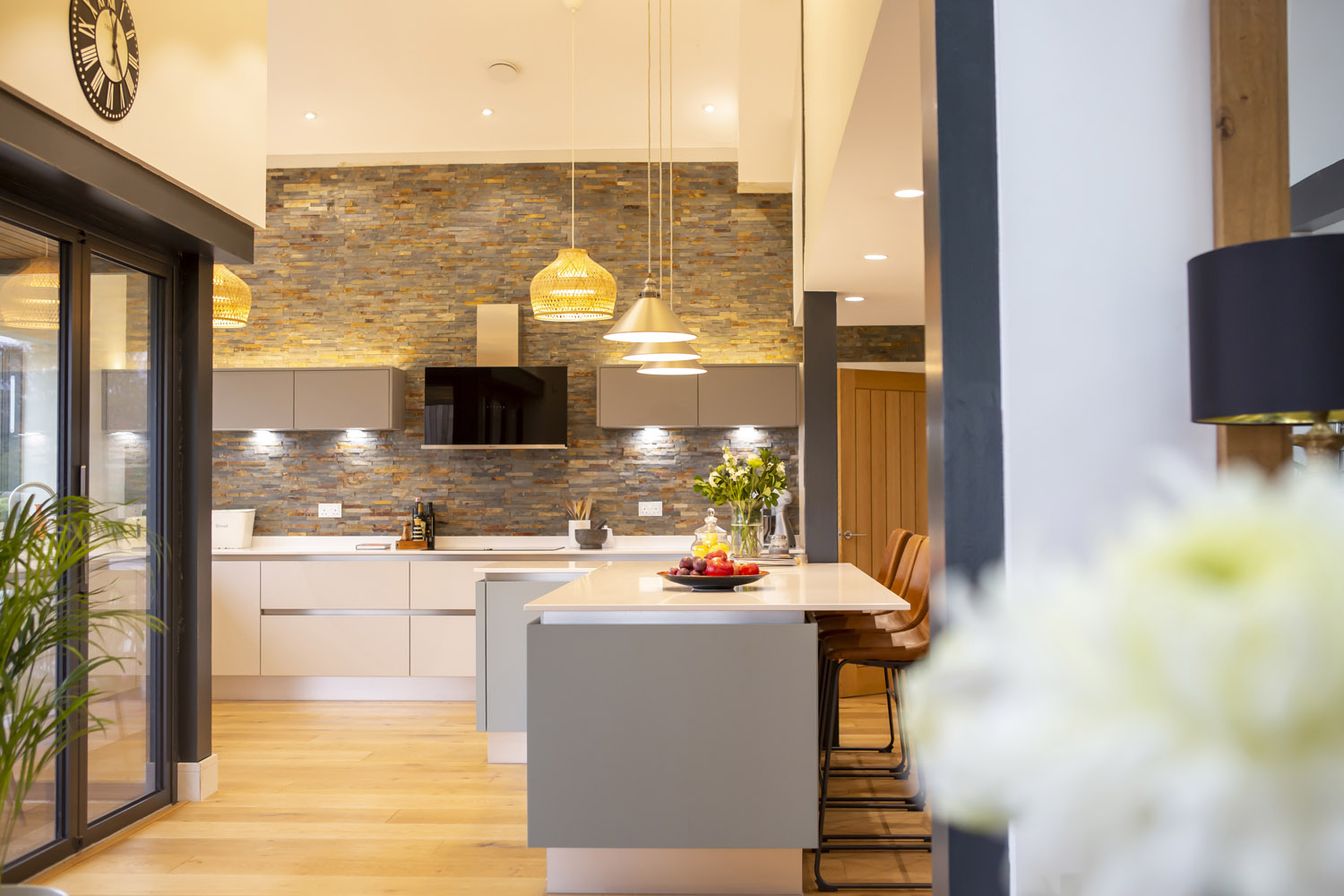 As an avid cook, Jane’s favourite feature must be the combi oven and microwave which she uses more than the main oven which sits adjacent to it. She also proudly shows off the kitchen cabinet next to it brimming with her collection of cookbooks. Wayne’s favourite feature is his coffee machine which sits neatly next to the main oven. Overall, Wayne says he’s over the moon with the whole kitchen and absolutely loves it and for Jane, she says that that is her overall favourite part too, the fact that they both love it.

The kitchen also features some great up-the-minute kitchen tech. Recycling bins are housed as four separate compartments within the one cupboard close to the sink. Forget the kettle here, as the Quooker tap has hot boiling water literally on tap when they want and if Wayne and Jane run out of ice this can be created in an instant too with the amazing Fischer and Paykel fridge freezer. This contains 2 freezer drawers in the bottom section complete with an ice tray. If the ice runs out the filter tap housed in the fridge door can produce more for your G&T. The double door fridge has more than enough room for food storage which is easy to see and space is not lost inside of the doors from the filter water on the front of the doors.  A Neff slide n’ hide oven is positioned between the coffee maker and the combi microwave oven whilst the Neff hob features its own magnetic dial. This nifty gadget lifts off the hob when not in use and can be moved around in different positions by pointing and twisting towards your cooking zone to adjust the control of the heating. Jane loves this but did admit it took a little getting used to!

They are so pleased with the kitchen and how Alec project managed it. “He was always there on the end of the phone if we needed him”.

Wayne and Jane also speak very highly of the fitters Paul and Dan who worked really swiftly after lockdown delayed things. The kitchen was fitted in a matter of weeks and they are so pleased with the workmanship. Charlie the dog, was pretty happy with it too in his laid back way! 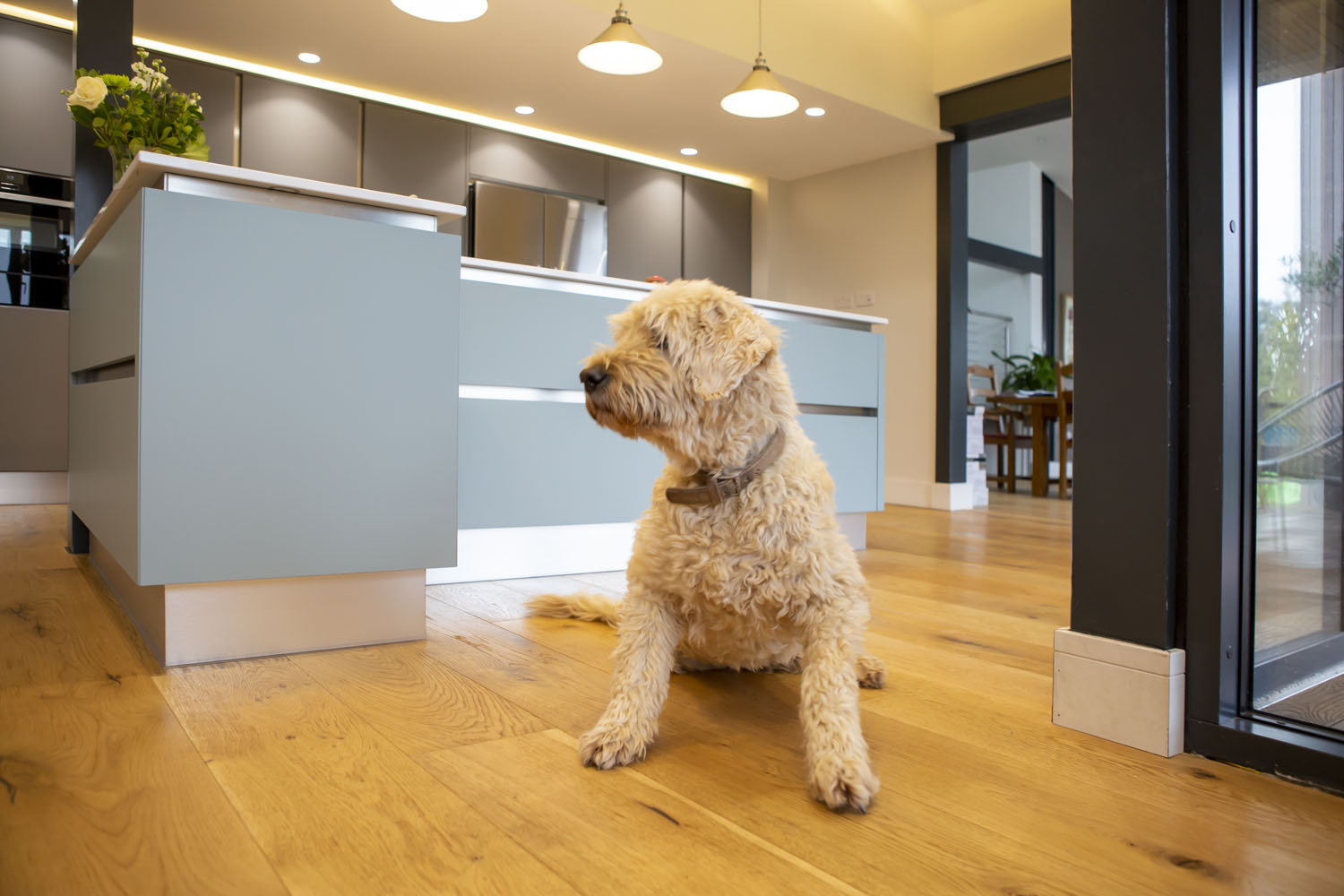 About Our Kitchen Designers: Each kitchen designer works on the kitchen projects from the start of planning and measuring, right through to the finished kitchen  (and after sales too) so you as a customer can be confident in the knowledge you are dealing with one person on the project rather than several people in different departments. That’s the beauty of our personalised service.

You can also email us at kitchens.bristol@gardinerhaskins.co.uk

Previously, Alison & John had extended out to the back and the old kitchen was part of an open plan layout...