Bathrooms by the beach for two loyal Gardiner Haskins customers. Discover how Alison and Darrell renovated their bathrooms to optimise the existing space and make them more contemporary.

Alison and Darrell moved into their stunning home by the seaside in 2007 and come 2021, they decided it was time to upgrade their bathrooms. An ensuite in their bedroom and another bathroom on the landing. Luckily, they’d previously had a kitchen designed and fitted with Gardiner Haskins and as they had such a great experience, they knew exactly who to turn to!

Initially, the pair were unsure what they could do with the ensuite bathroom due to its size. However, they boasted our designer David was very helpful and used his expertise to solve this problem. He suggested a completely different floorplan and dimensions that they “never would have thought of” otherwise, to make the most of the space. This way, they were able to fit a free-standing bathtub in one corner (their favourite feature), a WC in the corner opposite and slimline cabinetry across one of the walls for essential storage space. 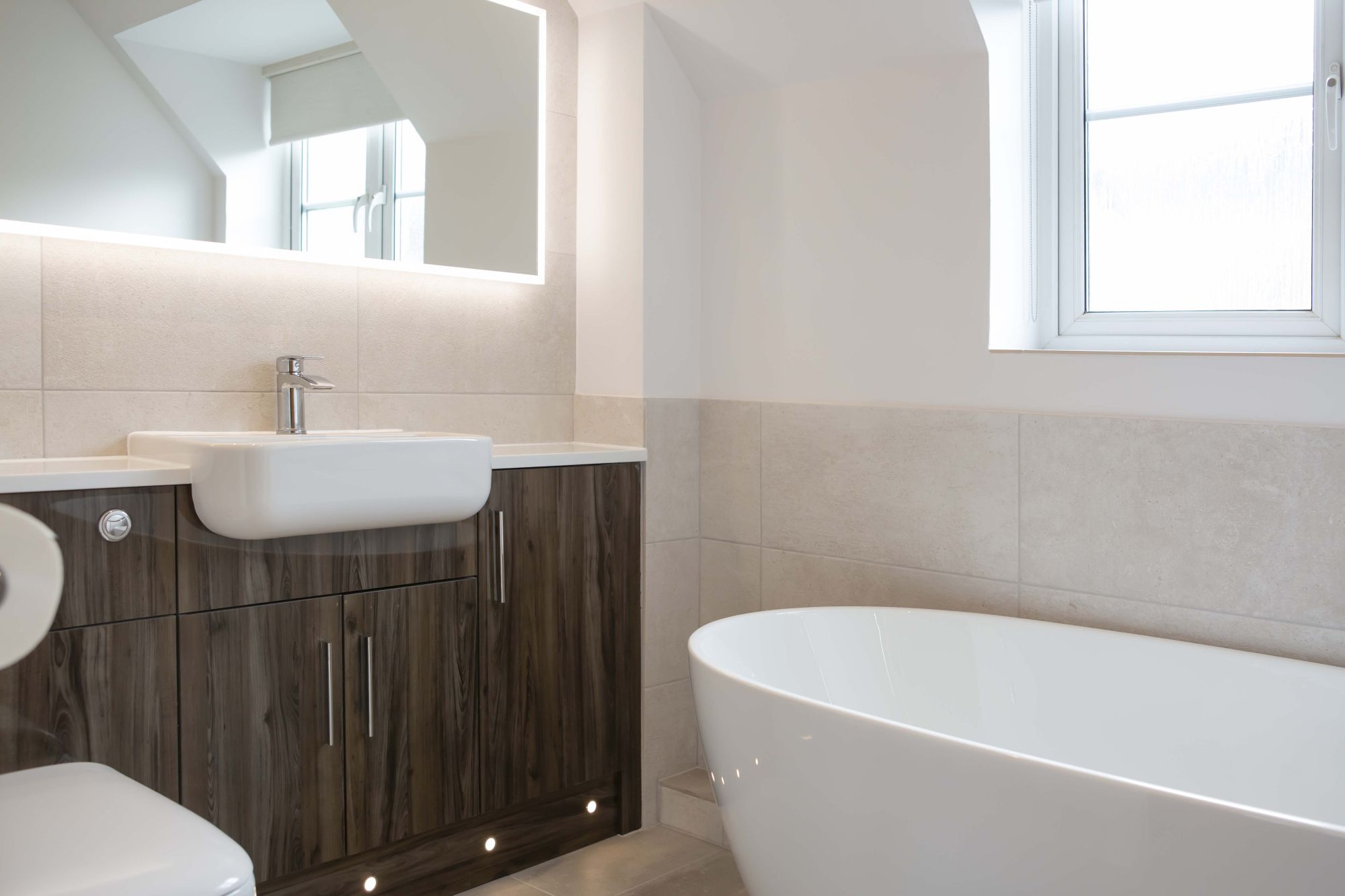 “The old bathroom was dated compared to what David came up with.”

With regards to the colour scheme, Alison and Darrell already had a neutral palette in mind, consisting of whites, creams and browns. The perfect choice as they all blended seamlessly together. Furthermore, the colour palette combined with the high gloss cabinets and chrome brassware made the bathroom feel polished, modern and chic.

To give the illusion of a bigger bathroom and brighten the area, Alison and Darrell opted for a large rectangular mirror with LED backlights. They also went with subtle yet effective LED lighting at the bottom of the cabinets. By integrating lighting in areas other than the ceiling, this optimised the space and made it feel warm and inviting.

Bathtub by Waters Baths of Ashbourne

Upon entering the main bathroom, it was clear that Alison and Darrell were going for the same aesthetic as the ensuite. Alison mentioned they wanted to use similar colours for both, yet different enough to achieve a slight contrast between the two rooms.

David the designer also suggested the layout for this bathroom. Before the renovation, it had a combined shower and bath. Alison and Darrell said they wanted to open-up and modernise the space, so they went with a standalone shower fixture instead which David helped them achieve. They also noted, and were very impressed, that the fitters installed the shower tray perfectly into the space provided.

To implement storage, they opted for a hidden cupboard behind the mirror and a floating cabinet beneath the sink. Both of which added an elegant touch as these features aren’t often found in your average bathroom. In addition, by fitting a floating cabinet, the space created below it instantly makes the room look bigger.

In terms of the colour palette, Alison and Darrell went with a bold matt carbon shade for the cabinetry, complimenting the black radiator opposite. These dark features really made an impact against the light grey textured tiling.

David enabled this pair of loyal customers to reinvent their bathrooms from start to finish. Not only could they explore their own creative vision, but David used his technical knowledge to resolve any queries they had regarding the layout.

Taps and accessories by Vardo

If you’re thinking of renovating your bathroom and want wraparound project management then we’ve got the designers and brands to make this happen. Visit us at Gardiner Haskins Interiors in Bristol, call 01179 292 288 or book your free consultation.